Even Thoreau Wouldn’t Sit in a Hot Tub Alone 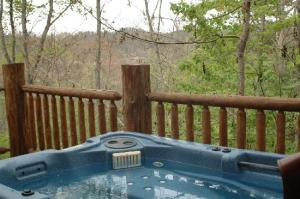 I left Chicago bound to Gatlinburg, Tennessee where I was offered a cabin on the border of Smokey Mountain National Park. It was strange occupying a four-bedroom cabin with a hot tub alone, but I was determined to have some Thoreauvian experience at some point in my life: a spiritual cleansing of the mind, a return to nature, a rebellious turn on society at large.  Not that Thoreau sipped wine and texted from a third floor balcony with a view, but, it is about as close as I will ever get to Walden.

I drove up winding roads with only my Ipod and the lilting voice of my GPS: “You are now on track,” or “You are now off track” has an increasingly existential ring. I listen without questioning. I wait for answers. With modern access to information, there is no room for error. There is an unhealthy personal dependence on technology: I have a friend who watches the arrow on her GPS instead of the road. She locates the little red flags on her screen instead of actual landmarks. I think that she finds her GPS faulty when it cannot locate her boyfriend.

When my GPS loses signal in the middle of the wilderness, I turn to an antiquated last resort: asking a stranger for directions. There are no women in the gas station. The men are grabbing beer out of the fridge, eyeing up lifesize cardboard pinup girls, or paying cash for one of the two pumps outside. I approach the teller at the gas station, who is wearing overalls and a black mesh baseball cap, “Which way to Gaitlinburg?”

He gives me the kind of “you-stupid-tourist” smile and answers, “It’s real simple, just keep following the road, go through two stops and take a right. Keep following it til you see you got there.”

“Couple miles.” I pull out a map and ask him to point out where we are and what road I should turn on.

“Now don’t make this too complicated on yourself, girlie, just go through two intersections and take a right, follow that all the way into town.” Wanting to trust in the simplicity of these directions and the kindness of strangers, I say thank you, wave and head back to my car.

As I am unlocking the door, a man with a cigarette in his mouth and a cut off t-shirt pulls up in a white truck: “I heard you was goin to Gaitlilnburg,” he says to me, the cigarette wagging.

“Well, you wanna follow me? I know a short cut.”

Before he gives any real indication of being a predator, I immediately start hearing dueling banjos and am horrified that my imagination gives way to these stereotypes. Before I can answer him, I am already tied up in some backwoods cabin, awaiting a lifetime of sex slavery and forced to raise the new generation of backwards southern progeny.

“No thanks,” I respond and make up a sloppy excuse about meeting a very large man. Poor guy, he probably really was going to Gaitlinburg. And knew a short cut.

I continue my drive up the mountains alone, where I chose to spend an entire week in complete isolation. It was lovely: the tree leaves were just beginning to crisp and redden, the air was mountain fresh, and the cicadas made for a nightly soundtrack. I was connected with nature, in the way I had intended, down to the ceremonious toss I gave each dead bird I found on the porch.

I always wanted to be one of those people who could spend night after night, reading or writing, or just drinking wine alone. The truth was that, in the cabin, despite my inclination to retreat, and a desire to find calm in isolation, I desperately wanted to talk to someone. Each day more urgently. I couldn’t bring myself to go down the mountains. I started to regret not following the man in the truck who offered me directions, if only for conversation. By the end of the week, I even started thinking that maybe a kidnapping wouldn’t be so bad. I went through each of the four bedrooms and wandered down the halls, wishing that if I shouted, someone would hear me. Cabin fever had set in. I even longed to hear the mocking voice of my GPS.

Loneliness comes in strange forms, and can rear its head even in the most unexpected places, like home. In this case, I had asked for it. It didn’t help that the cabin had five bedrooms, an eight person hot tub, and a large dinner table set with enough chairs for Thanksgiving dinner. I enjoyed all of these accoutrements alone. I had successfully retreated, but the entire act of hiding out in a cabin fell flat.

Yes, I had my Thoreauvian experience, but even Thoreau wouldn’t sit in a hot tub alone.