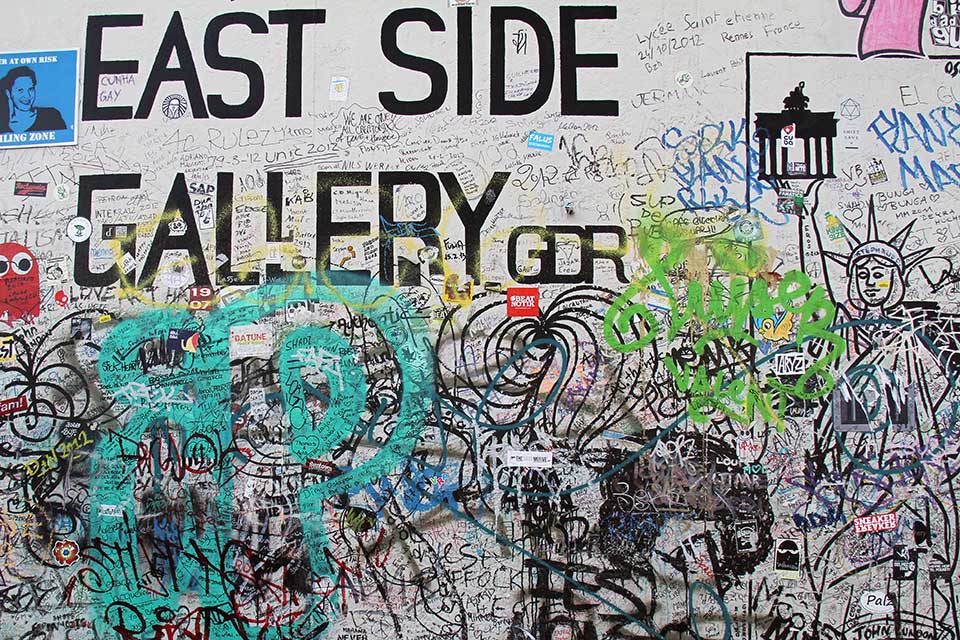 Last week, a lawyer told me that the mayor of Berlin has declared it an artistic hub, and that immigration authorities should treat artistic visa applications kindly. The city is drawing artists from all over the world for its financial support of the arts, affordability, and the broad and varied arts scene. It is not surprising and the artistic qualities of Berlin manifest in its street life, history, and even in the everyday. I met a street artist the other day who sold me a few of his pieces and though he was not rich, he offered hope that there has been a city-wide personal and systematic investment.

Like New York and most international cities, in Berlin, you will always find the street musicians and performers, the painters who decorate the sidewalk, and the unexpected intersection variety show. There is also a kind of underground scene, even the graffiti or more fittingly titled “street art” that the authorities do not wipe clean. It’s refreshing and democratic and the artistic voices dominate the buildings and walls more than billboards.

The first time I met a real *artist*, I was in love. Though he was a highly trained and talented guitar player and song writer, it wasn’t his music that inspired me: it was his freedom in life and dedication to living passionately. He may have been the first person I ever met who fearlessly and abjectly denied a four-year degree to write songs.

There was his ability, and then there was his life. He picked me flowers off the street sidewalks and tucked them behind my ear. He drank beer with the homeless who slept along our block. He stayed up late playing piano and belting folk and blues like Tom Waits. He only paid in cash which he kept in a sock in his closet. His socks always had holes and he smelled like cigarettes and leather.

The summer I was studying for the bar, he brought me to a hidden lake in the backwoods at midnight to go swimming. A sign posted said the park was closed and I had heard of cops ticketing those who broke the rules. The water was calm, lit only by the veneer of moonlight, and I said to him, “I can’t.” I was afraid of getting a ticket at the same time my bar application was being processed by the Supreme Court.

Looking back, there were many things I feared unnecessarily.

To be fair, I had just picked him up in jail the week before after he was arrested in the same spot when he tried to fight a police officer. Young girls love anarchists, apparently. Every time we went to the grocery store, he would get caught with fistfuls from the bulk candy buckets. They would kick us out and he would laugh maniacally, throw his head back and ditch the remaining candy in his mouth before we ran out and jumped back on our bikes.

Art (and anarchy) were in his blood and I have always remembered and cherished this about him. In many ways, he changed my life, allowing me to forget about rules and expectations and allowed me to see myself without degrees or licenses or jobs and money. Who we are, is really, more tangible, more alive, when we let go, stripped down, even if it means illegal skinny dipping at midnight.

Though the musician was definitively prolific, the second “artist” I met in my life is anything but. She is eccentric, creative, brilliant, but cannot seem to finish anything. Her artistry, is not in an form or end, but in a kind of freedom: reckless and larger than life. The woman is connected to something that transcends the material world. She makes children light up. She is bright, weightless, and free. Despite her fraught aimlessness, she continues to be one of the most inspiring people I have met. She wears big hats and her car is a trunk full of clothes.  This is how I remember her, as she was always drifting between L.A. and New York, depending on the weather.

One year on her birthday, she shamelessly appeared at the restaurant in a short, yellow, layered, busty, satin $600 Betsey Johnson dress, fishnet stockings and 6-inch leopard print heels. Fabulously obnoxious, she also carried a dozen yellow roses to match. After dinner we went to a club called “Happy Endings,” an old Chinese (ahem) massage parlor near Chinatown. When the dancing slowed and the crowd trickled out into the night, I remember the trail of petals out of the club and onto the dirty Lower East Side streets, the way the roses fell behind her, tracing a path as she jumped on the back of a motorcycle and tore off down Delancey.

It is still one of my favorite memories of her, and of New York.

My friend Auley here in Berlin works a 9-to-5, but wants to leave his office work to be musician. He is classically trained though never considered himself an “artist.” He hesitates when I use the word to describe him. I think this is why he has been reluctant to pursue his vision, even though his passion has been clearly articulated (at least to me). He is also a professional dancer, guitar player, and genuinely committed to all art forms, but more importantly, a creative life.

I said to him, “But, you are an artist, so you will always have to create no matter what you are doing.” This got us to talking about what it means to be an “artist” and at what point the term applies to you or your life. I am also in the throes of writing an application for an artist visa, so it seemed particularly fitting to examine the question. As I explained to him one day, I always envisioned the arts very broadly and for my purposes consider artists both as producers of art but more importantly, having a vision, and living with creative purpose.

Still, there is a fear in letting go and in using the “A” word (I have found it difficult myself). I think for some, the question has to do with income—are you supported by your art or are you just creating alone? Born into capitalism, we are in many ways, defined by what we are paid to do. This can make any artistically motivated person strapped by an identity crisis the same reason writers become professors, publishers or critics, and painters become therapists or teachers. We are desperate to define ourselves, even at the cost of our passions.

I think the most important part of being a creative person, or an artist, is letting go, of fear, of expectation and of self. It occurred to me that I could not encourage Auley to let go of artistic fears, without also letting go of my own. Artistic progression demands risk and there are always parts of the self that we are unwilling or reluctant to share or express. We had a brief conversation about the difference between the image projected by artwork versus truth: reality versus desire in interpretation.

Still, artistic work must be vulnerable.

I decided it was high-time to release some (amateur, raw) recordings I have kept hidden, but for a few friends. While sitting at a bar in Kreuzberg, contemplating this blog, I sat next to an American who works for Sound Cloud in Berlin. Encouragingly, he quickly set up my account and helped me with the coding. I thought it fortuitous, and a sign.

You can find these recordings here.

I am adding some anecdotal history, because in the end, I am still a writer with a need to explain everything. Here are some raw, very simple recordings and a few stories to put them in context.

Big River (2009). This is one of my favorite Johnny Cash songs I covered a few years ago when I first landed in New York. I always liked the very stark tonal change that shifts when a woman sings a man’s song, or vice versa. More importantly, this song reminded me of  the pain of women lost and of a woman who still chooses the wandering river over a man.

Who Will it Be (2009). I wrote this song for a lover, who threw down the gauntlet, in an age-old struggle over impassioned, but ultimately unrequited love. Most of the lyrics were inspired by one line he said over pillow talk: “You were built for unconditional love.” I could only take his words as an insult, for he saw me as a source of love, but not an object worthy of his own ‘unconditional’ affections. It occurred to me then, though, that it was better to be built this way, to risk love, than never to give love at all. I lost him to his own inability to love (I believed), though in the back of my mind I was always haunted by the idea that someone else would change him or give him the inspiration to love back. I obsessed over her, who she was, how she would captivate him or make him love, in a way that I hadn’t or ever could.

Winter’s Come and Gone (2008). This is the first song I ever recorded(a Gillian Welch cover)  in my bathroom in Minnesota as you can tell from the weak vocals and repetition. I loved my apartment in the attic; this room that felt like a tree house. There were raccoons in the trees, bats in rafters and always birds on the windowsill. I liked the idea of winter and the mood of seasons expressed in the organic shifts; the ability to take signs from nature; the tender range of human experience simplified in the color of a feather.

Lighthouse Keeper (2010). I love this song, which was first sent to me, converted from a rare 45 by my (ex) fiance before we left New York. At the time, we were in love and the song represented to me the secret desire to find respite in the storm. I liked the idea of a lighthouse keeper (a symbol of the soul), but also, dreaming of dedication to one that is aware, a true protector with a hyper-sensory connection and a keen sense of the world and the exploratory vision that isthe sea.

Last weekend, Auley and I took a road trip to Prague and stayed in an old dance studio away from the tourist hub, with large skylights and bouncing naked acoustics, where we had two guitars and created a kind of freedom of space to explore what I have dubbed, “art brain.”

We carved out these days to embrace our detachment in dance, music, lyrical experimentation in a way that gives way to the creative. Letting go, we spent the weekend, exploring the back streets of Prague, sitting and scribbling at cafes, then returning to the studio to sing and dance and work on some new music—we are both affixed to folk given the one voice-guitar duo, though (fearlessly) pushing some boundaries towards the electronic.